"If it weren't for food assistance, I don't know what we would do'" 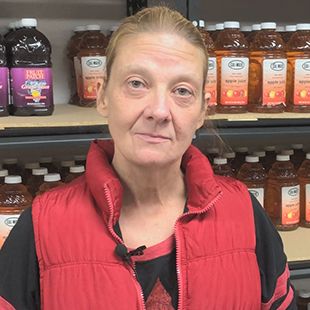 Due to difficult circumstances, Stephanie Ballou cares for three of her grandchildren and they are quick to understand that, "grandma doesn't have enough money right now." Thanks to her nearest Great Plains Food Bank partner food pantry, she is able to provide healthy food options for her grand kids.

At the end of every month, Stephanie Ballou explains to her three grandchildren why they drive 25 miles to the nearest food pantry.

“Grandma doesn’t have enough money right now and she wants you to eat good food,” she tells them.

Stephanie raised her own kids. One of them is now incarcerated, leaving Stephanie to care for her daughter’s children ages 6, 3, and 1-and-a-half.

“If it weren’t for food assistance, I don’t know what we’d do,” she says.

With nine days left in September, she asked her own father for gas money so she could drive from Starkweather to the food pantry in Devils Lake. Her 3-year-old granddaughter helped her pick out sweet corn and tomatoes; her toddler grandson chewed on an apple while they shopped.

Stephanie believes in feeding her grandchildren a variety of healthy foods. When they moved in with her, the children didn’t know that chicken came in forms other than nuggets. Thanks to donations to the food pantry, the family has tried new foods such as quinoa and 100 percent juices.

Stephanie encourages her grandkids to try the new foods as they sing “Try a New Food, It Might Taste Good” from the television show Daniel Tiger’s Neighborhood.

A year ago, Stephanie was living in Fargo by herself when she faced health issues and couldn’t work. She visited local food pantries so she could eat.

By the time she moved to Starkweather to be closer to her extended family, she was able to support herself on a fixed income made up primarily from disability payments. She even donated to the food pantry as a way to say thanks for the prior help.

When she stepped in to help her grandchildren, she needed assistance again.

The youngest children are eligible for WIC (Women, Infants, and Children Food and Nutrition Service).  Still, Stephanie relies on the local food pantry to fill in the gaps. Once she even called and asked about diapers.

“I never feel humiliated,” she says. “I don’t have to explain that I’m struggling.”

Without food assistance, Stephanie would likely borrow money from family or beg them for food. More likely, she’d go without meals. Anything extra already goes to support her grandchildren.

“Our world has a hunger problem, and it’s here too,” she says. “It’s a big deal when we can come (to the food pantry) and get enough.”