Through difficult times, Schmid becomes part of the solution 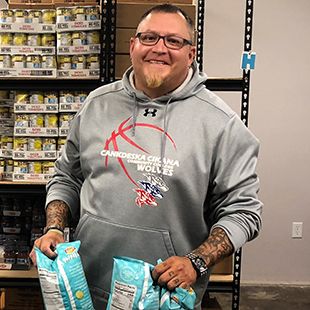 Through difficult times, Schmid becomes part of the solution

A father of four, Patrick Schmid and his wife were financially stable until the demand of too many years spent in physical labor took its toll on Patrick. Following two shattered hips and other physical ailments, Patrick became unable to work and began collecting disability payments, but the loss of income became too great. The family sought emergency food assistance while Patrick also went the extra mile in helping others.

But years of physical labor plus a degenerative bone disease resulted in two shattered hips by the time he was 39. The married father of four received disability payments, but the family struggled to pay all the bills on his wife’s income.

So the family visited the local food pantry to stretch their food budget.

“It’s humbling and there’s a certain level of humiliation in doing that,” Patrick says. “But that extra jug of milk or extra couple pounds of meat makes a difference.”

After having both hips replaced, Patrick decided to attend Cankdeska Cikana Community College in Fort Totten to study social work. When he earns his associate's degree, he plans to transfer to the University of North Dakota.

As part of his schooling, Patrick needed an internship. He decided to do it at Hope Center, the food pantry in Devils Lake. There he stacks shelves, unloads trucks and carries groceries for those who visit.

“I want to make sure places like this are always available to those who need the help,” he says. “My mom always said you can be part of the problem or part of the solution. You can’t sit on the sidelines.”

Patrick also is working to organize free snacks to be distributed on campus between classes.

“A lot of people come to class hungry,” he says.

Patrick hunts, making sure there is plenty of venison and game birds for his family to eat. He knows how to stretch a pound of hamburger to feed a crowd. He also makes sure there is food for extended family members to eat should they need it.

“We have massive families and if someone doesn’t have something, we help,” he says. “That’s our culture.”

Patrick is a member of the Dakota-Sioux Spirit Lake Tribe.

As a volunteer at Hope Center, Patrick has a heart for those who come in. During any typical shift, he recognizes nearly everyone who comes in the door. They are his neighbors, his family members, his friends, and more.

“Nobody should go hungry,” he says.