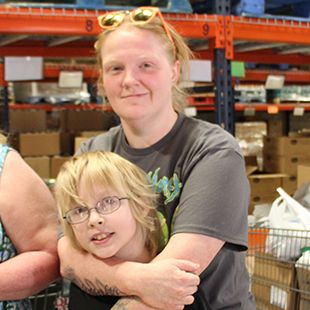 Mckenzie is quick to admit she doesn't try to be a single mom to her special needs son, Zachary, all by herself. She leans on those close to her, including the Emergency Food Pantry, a partner agency of the Great Plains Food Bank, for help. Zachary is severely autistic with medical conditions that can make life for the small family difficult. Read about all those that have come to the side of the small family to help them get by.

Meet Mckenzie, a single mom, and her now nine-year-old son Zachary. The two have been on their own for seven years since Mckenzie’s marriage ended in divorce.

They visit the Emergency Food Pantry, a partner agency of the Great Plains Food Bank, when they run low on food. Some months are more difficult than others due to Zachary’s condition.

“Zachary is severely autistic,” Mckenzie said. “He has an abnormal one millimeter hole in his heart. He has two heart murmurs. He suffers from cyanosis.”

Their recent trip to the Emergency Food Pantry was in the midst of particularly trying times. Mckenzie recently had a lengthy battle with pneumonia and Zachary was recovering from a recent surgery. The family was attempting to get by on a weekly $100 unemployment check and benefits from the Supplemental Nutrition Assistance Program (SNAP) while Mckenzie searched for work. With their medical conditions, pets at home and other issues, life became difficult.

“Toward the end of the month it becomes a little hectic,” Mckenzie said. “But we do everything we can to make it last. We try not to use the (Great Plains Food Bank) that much unless it’s like right now. Our fridge is empty. Our dogs have food, but we don’t.”

Zachary’s condition also creates obstacles with the limited variety of foods that he is able to consume. He has an extremely minimal palate and problems with food texture. Their SNAP benefits essentially are consumed buying specific foods for Zachary. According to Mckenzie, the list of foods that Zachary isn’t able to eat is longer than the list of foods he can.

And doing things entirely on her own is something Mckenzie makes no attempts to do.

Mckenzie has a boyfriend that helps the family get by and has reconnected with her parents, who she can turn to for assistance from time to time. The reconnection with her parents has been life-changing for Zachary as well.

“At two months old, I put (Zachary) in my dad’s arms and they just had this bond,” Mckenzie said. “It’s stronger than a mother-son bond. It’s the most incredible thing I’ve ever seen. Over the years, it’s just grown stronger. If my parents move to Michigan or they move somewhere else, we have to go with them. There is no ifs, ands or buts because of the bond that my son has with his papa.”

However, despite their struggles, Mckenzie feels the family is close to turning a corner as she had just landed a full-time job that will help with much needed steady income. For the first time in a while, things are looking up.

“We’re right on the ledge of trying to make things better,” she said.

And Mckenzie always takes comfort in knowing food assistance will be there when the family needs it.