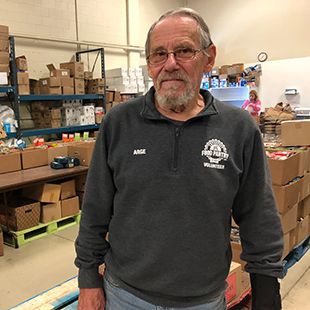 This is how I give back

Each weekday you can find Arge Laddusaw volunteering at the Emergency Food Pantry in Fargo, a partner agency of the Great Plains Food Bank. Forced into retirement due to health reasons and with a Social Security and SNAP payment that only takes him so far, Arge also visits the Emergency Food Pantry to receive needed food assistance. Spending time volunteering is his way of giving back.

This is how I give back

Every weekday afternoon Arge Laddusaw can be found volunteering at Fargo’s Emergency Food Pantry. He’ll stock shelves or operate the fork lift. On Fridays, he’ll drive truck to pick up donated food. He’s been doing it for the last three years.

“I like the people and it gives me something to do,” he says.

But there’s another reason he devotes hours each week to the food pantry: he goes there every other month in need of food assistance.

Four years ago, Arge was forced into retirement after 42 years as a drywall taper. Health issues, including difficulty breathing and a hip replacement, made it impossible for him to work fulltime.

Arge, 66, receives Social Security each month. The $1,200 check barely covers lot rent for his trailer home, electricity and other expenses. A year-and-a-half ago, the retiree started receiving $18 per month in SNAP benefits, also known as food stamps.

With his SNAP benefits, Arge buys milk, bread, eggs and butter. Any funds left over from his Social Security check also go toward groceries. It’s usually not enough.

To stretch his food budget, Arge visits the food pantry as a client every other month. Without assistance, it would be tough to eat each month.

Before retiring, Arge prided himself on making good money. There was always enough to pay his bills, including child support for his four daughters. Saving money for retirement proved more difficult.

“Basically, I retired and ran out of money,” he says.

Because of his experience, Arge understands what others who visit the food pantry are going through. Some of the stories shared bring him to tears and push him to act.

Once, a man showed up on a motorcycle to the food pantry in February. He had just been released from jail and, upon returning home, found that his wife hadn’t had food in the home for two weeks. He needed groceries, but couldn’t carry much on his motorcycle. Arge offered to deliver the food in his vehicle.

Another time a homeless couple in their 40s arrived at the pantry after being told to pack up their camp site along the river. Arge offered to help them find shelter. When he found that the local shelters were full for the night, he invited the couple to move in with him until they could find permanent housing. They stayed for two weeks.

Arge does what he does because he believes a helping hand – or a cart of groceries – can make a difference.

“If you offer people a little bit of help, you can get a person to the point where they can make it on their own,” Arge says.