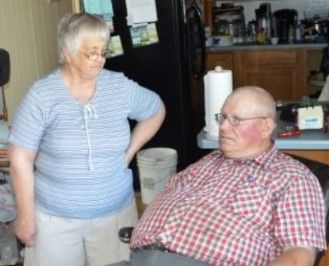 A U.S. Army veteran, Willard Carpenter and his wife, Linda, rely greatly on the SNAP benefits they receive. Willard lost his right arm during a factory accident more than 45 years ago, but has not slowed down his farming operation.

Willard Carpenter, 71, has never shied away from hard work.

He farms, has operated a backhoe and drives truck to haul gravel. Not even a factory accident that resulted in the loss of his arm more than 45 years ago has held him back.

Still, the last few years of trucking have proven challenging for the U.S. Army veteran. Rising costs for fuel, licensing, insurance and repairs have eaten his profits.

“Otherwise I’d have to find some other means. Probably do without, I guess,” he says.

Willard and his wife of 46 years, Linda, live on a farm between Walhalla and Cavalier, N.D. It’s a small home with handmade wood floor and decorations, including a cross-stitched prayer by Linda: “We thank thee Lord for this thy food and that we are together.”

Willard grew up on the farmstead in the shadow of the North Dakota Sand Hills. He raises potatoes, some alfalfa and oats. He’ll hunt elk and deer that graze in their yard. He’s even self-butchered an elderly cow that a neighbor gave him.

Yet, it’s not enough. Veteran benefits give him access to healthcare and medications. But there’s not enough money for food.

He used to receive $175 per month in SNAP benefits. Cuts in the past year mean he now receives about $50 per month.

“One trip to the store and it’s gone,” he says. “You have to be very careful and decide what’s a priority.”

Most months he spends those dollars on milk, bread and some eggs.

Willard shops at the grocery store in Walhalla, which is about 11 miles away from his small farm. When he has the time and money, he and Linda will travel to Grand Forks (about 100 miles away) where they can shop at Sam’s Club. Their dollars stretch further.

“That’s a big savings,” he says. “You can buy triple down there for the same as it costs here.”

Food boxes filled with canned fruits and vegetables and other nonperishables are delivered to his region every three months. This also helps stretch his food budget.

Willard was drafted into the U.S. Army in 1967. He served for two years at a base in Germany. His assignments included truck driver, mechanic and cook.

“I loved it,” he said. “The countryside and the people were wonderful. I’ve always wanted to go back."

He returned home to a factory job in agricultural production. It was there that he lost his arm when he got caught in a conveyor belt. It would’ve been easy to feel sorry for himself, but Willard’s grandmother gave him some tough-love advice. “She told me there was no use crying over spilled milk and to pick myself up and get busy,” he says.

He took that to heart, adapting heavy equipment so he could operate backhoes and eighteen-wheelers with one arm.

That work ethic is why he gets so frustrated when he hears that food assistance may be cut or isn’t a federal priority.

“Whoever thinks about cutting that funding out best not talk to me about it. I’ll put them on the straight and narrow,” he says. “These benefits are so helpful to people who need them.”