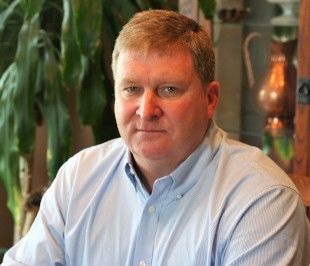 A 20-year retiree from the North Dakota Army National Guard, Steve Olson struggles to recall a time in his childhood when his family didn't receive SNAP benefits. As he put it, they offered a hand-up, and allowed him a path to now owning his own consulting company.

Steve Olson has probably heard every joke there is about living in a trailer house.

Today, he runs his own consulting company, Olson Corporation. He retired at the rank of sergeant major after 20 years of service in the Army National Guard. He has worked as vice president of operations at nonprofits.

Growing up, he lived in a beat-up trailer across the street from his school; his family received food stamps.

“I never felt like I was at a disadvantage,” Steve says. “Food stamps provided a foundation that motivated me with a remarkable sense of responsibility. For me, they were a hand up.”

Steve ate free lunches at school and commodity cheese at home. One of his family’s favorite treats was mush made from flour, water and sugar. None of that affected his work ethic. He was the type of kid who wouldn’t leave the gym until he had sunk 20 free throws in a row.

After Steve graduated from Sheldon (N.D.) High School, he tapped into Pell Grants to pursue training as an electrician. He also joined the National Guard.

When a full-time job in the Guard opened, Steve applied and made the military his career. By the time he retired, he was overseeing a $26 million contract in support of recruit training.

“Military personnel don’t make a lot of money, but they’re proud of their service,” Steve says. He knows veterans who have relied on food stamps or SNAP to make ends meet. One colleague from South Dakota received food assistance when he lost his first job shortly after getting married.

Steve knows veterans who returned home from deployment unable to go back to the job they had before – either by choice or chance. He recognizes the growing trend of homeless veterans.

These stories remind him that military personnel and veterans are not immune to financial struggles, although they may be hesitant to seek help.

“Needing assistance is super harsh on anyone,” he says. “I can guarantee you there are more people who need food assistance than receive it because they don’t want to ask for help.”

Yet, he knows firsthand what a hand up can do. In addition to his military service, Steve returned to school to earn his bachelor’s and master’s degrees. Today, he and his wife live in Moorhead, Minnesota. They have two grown sons. His consulting business is booming.

None of it would’ve happened without some assistance along the way, he says.

“If anyone is going to be successful, they can’t be hungry,” he says. “That’s true for everyone.”