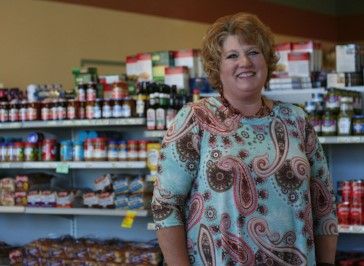 Shirley Reese remembers the difficult times she and her family faced when they struggled expecting their sixth child and how vital their SNAP benefits became. Now the manager of a grocery store in Hazelton, Reese understands the difficult situation facing many of her customers on SNAP.

With sunshine in her voice, Shirley Reese greets the customers at Main Street Market in Hazelton, N.D.

She hands out bakery cookies (and napkins) to two preschoolers whose mother picks up some items for lunch. Others stop by to purchase milk, cat food, frozen pizzas, and the canned tomatoes that are on sale.

As manager of a small, rural grocery, Shirley keeps prices competitive so that residents will shop locally instead of driving to Bismarck, an hour away. She knows how important access to good food is for those who live in rural areas, especially for those who may not have the financial resources to drive far.

More than 10 years ago, Shirley had five children under the age of 8 and was pregnant with her sixth. Her husband came home with some news.

The higher education institution in Wisconsin where he worked for a decade was cutting jobs. Concerned that a coworker with cancer would be let go, Shirley’s husband opted to resign and start his own business.

He earned less than $10,000 that first year. The couple took out a second mortgage to pay for a septic tank that failed. That money also covered bills that included a gluten-free diet and supplements for their 4-year-old son, recently been diagnosed with autism.

The family never went hungry, but meals often consisted of 39-cent boxed macaroni and cheese. A case worker suggested they apply for SNAP benefits. The family of eight was eligible for $900 a month.

“Had I know about it earlier, we would’ve applied earlier,” Shirley says. “SNAP benefits gave us the option of shopping for healthy foods. You got to make choices.”

The family received food assistance for less than a year. Shirley’s husband eventually found full-time employment, and that job led the family to Hazelton.

The Reeses are still affected by those two years of financial uncertainty. It took nearly a decade for them to dig out of the debt they acquired. Making it more difficult was the fact that their SNAP benefits ended as soon as her husband brought home a steady paycheck.

Shirley understands why, but she wishes the benefits would’ve been gradually eliminated. That would’ve given the couple time to adjust their finances and make some progress on paying back debt.

“The program is essential for people when they desperately need it,” she says. “With a bit more help, we can support families as they experience freedom from these programs.”

Today she estimates that about 5 percent of sales at her grocery store come from SNAP benefits. She knows that these families and individuals may not always have enough money or time to drive to Bismarck.

It’s one reason she works hard to make sure the Hazelton grocery store offers a good selection of products at competitive prices.

“I know what it’s like to be really, really careful about the food you buy,” Shirley says. “I want to make things easier for someone else.”