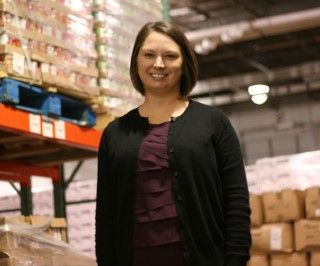 Now the director of Ending Hunger 2.0 for the Great Plains Food Bank, Melissa Sobolik received SNAP benefits during her time in college. Today she fights the stigma many have with receiving benefits. "We've made you less than a person if you need help. We need to change that. You’re not a failure if you need help; you’re setting yourself up for success," she said.

As director of Ending Hunger 2.0, she often hears about the stereotypes and the stigma faced by people who receive SNAP benefits. Recently, she heard one grocer complain about “those people” who used their assistance to buy junk food.

“It got personal for me,” she says. “I am that person. I once received SNAP benefits and bought junk food because it made me feel normal for the first time.”

When she was a junior in college, Melissa moved off campus and couldn’t afford the college meal plan. After leaving a bad relationship, she found herself solely responsible for rent and expenses. Even working two jobs, she had about $25 a month to spend on food.

Her refrigerator was almost always bare, and she cherished the days that co-workers brought baked treats to share. SpaghettiOs and ramen became staples in her diet.

“It was part of my life,” she says. “I never saw myself as a food-insecure person, but I was. I didn’t always know where the next meal was going to come from.”

Melissa’s mother encouraged her to apply for food assistance. The process was long, complicated and invasive. One interviewer asked her how much she paid for her haircut.

After completing the paperwork and submitting to interviews, she was surprised to find that she was eligible for about $100 of food assistance a month.

“I didn’t think I’d ever be able to spend it. I bought meat and cereal and even the Thanksgiving turkey for my family,” she says. “For me, that amount was huge.”

Melissa received SNAP benefits for three months. During that time she focused on work and school and not on what she was going to eat next.

After graduation she married and moved to California for a short time before returning to Fargo-Moorhead and working for the Great Plains Food Bank. In 2012 she was elected to the Fargo City Commission for one term.

Looking back, she recognizes that her adult life could’ve unfolded so differently. She could’ve done poorly in class and dropped out of school because of a lack of nutrition. It could’ve taken her longer to complete her degree, increasing the costs. She suspects these scenarios play out too often because people hesitate to ask for help.

“There’s such a stigma in admitting you need assistance,” she says. “We’ve made you less than a person if you need help. We need to change that. You’re not a failure if you need help; you’re setting yourself up for success.”