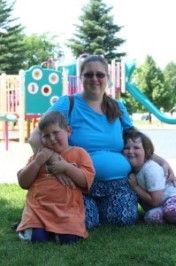 Leslie Tibbetts lives in Grand Forks with her husband, Anton, and their two young children. When Anton lost his job this year, SNAP benefits has provided a supplement to still keep the family fed.

Leslie Tibbetts and her husband, Anton, moved to Grand Forks three years ago when they couldn’t find an affordable apartment in Thief River Falls, Minnesota, where Anton worked.

The couple – and their two small children -- were doing well until Anton lost his job.

“It took a while for him to find another job, so we went to the county to see if we qualified for assistance,” Leslie says. “Without SNAP, we wouldn’t have been able to feed anyone.”

SNAP benefits helped stretch the couples’ dollars until Anton found another job in Grand Forks. Even when the steady paycheck came in, the family still qualified for some food assistance.

But when Anton lost his new job in July 2017, the allocated $250 a month for food didn’t go far. While waiting to see if the family’s benefits would be increased again, the couple began to tap into what little they had saved for Christmas.

“That money is now almost gone, so there won’t be much for Christmas this year,” Leslie says.

She hopes that the family’s benefits will be increased again – at least until one of them finds consistent employment. In the meantime, every day she takes James, 3, and Maura, 5, to local parks where free lunches are served to children. Thanks to a backpack program hosted by The Salvation Army, Maura will enter kindergarten with new school supplies.

Even with assistance, Leslie is careful to stretch the dollars as far as she can. She is good at shopping sales and takes time to find the best deals. Knowing that her son has an upcoming birthday, she was excited to recently find cake mixes for 75 cents a box – a 25 percent discount.

“Even 25 cents makes a difference,” she says.

Leslie is thankful for support during a tough time. Even when she worries, she dreams of the day when she will give back to the programs that have helped her family. She wants to show her children that helping others in need is the right thing to do.

For now, she does what needs to be done. There are days that she skips meals so that James and Maura have enough to eat. There are nights when cereal or a can of soup is the only dinner choice.

It’s better than it could be, she recognizes.

“It would be impossible to feed my family without SNAP. It helps us put food on the table,” she says and pauses. “Still, it’s a struggle either way.”