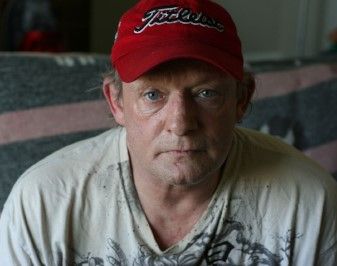 Formerly homeless and a logger for 27 years in the Pacific Northwest, Dennis Peck suffers from a number of medical issues that makes finding work difficult to come by. SNAP benefits help to relieve that burden and for him to eat healthy.

Dennis Peck understands the challenges of living in a home after years of sleeping in shelters, on friends’ couches, and under railroad tresses. When he first moved into his own apartment, he had to relearn how to clean it.

One thing he didn’t need to be taught was how to cook.

Peck was a logger for 27 years in the Pacific Northwest. After his second wife passed away, he hopped on a freight train to see where it would take him. He got off in Fargo, intending only to refresh his supply of food and water, but he liked the community enough to stay.

Work was hard to come by. He slept at homeless shelters and on the streets. Then he was diagnosed with a chronic lung condition and spinal stenosis, a condition in which the spinal canal narrows and may cause nerve-related problems. He was no longer able to hold onto items and his handwriting became nearly illegible – side effects from years of hard physical labor.

“Nobody would hire me with my medical conditions,” he says.

Eventually, Dennis met with Presentation Partners in Housing, which helped him secure housing. He applied for SNAP benefits and now receives $194 per month. With the benefits, Dennis can shop for the food items to make tasty, hearty meals. If he budgets carefully, the food lasts all month.

“I like to make breakfast, and roasts, and spaghetti or linguini,” he says.

The 51-year-old recently had neck surgery to reduce the effects of spinal stenosis. He can no longer carry more than 15 pounds and his feet swell when he walks too far. Because of SNAP, he can purchase all of his food items at one location each month.

“There are more people like me who are in a situation where we need some help,” Dennis says. “If there’s no SNAP, it creates another burden.”

He appreciates a helping hand. Growing up, his family received federal food assistance when his father lost his job and was being retrained as an electrician. Food stamps filled the gap until his dad could work again.

“It got us through a tough time,” he says. “That’s what the program is for.”

And Dennis is willing to lend his own hand to help people thrive during tough times. When new residents move into his housing unit, he offers them lessons on how to use a kitchen.

“A lot of people in this building come straight off the streets,” he says. “They don’t know how to cook, so I teach them.”