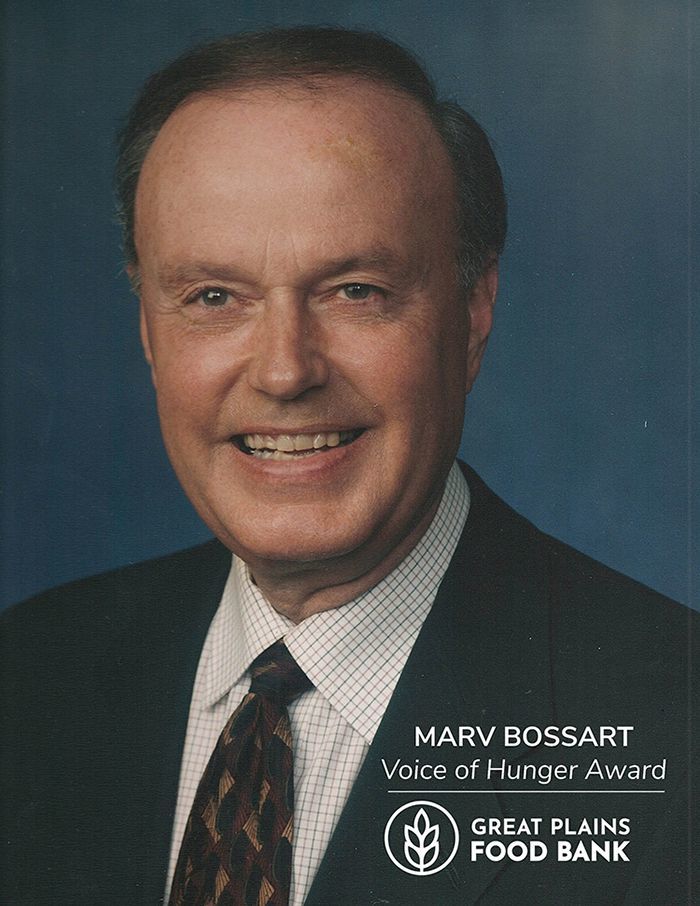 Legendary local broadcaster was also a champion in the fight to end hunger
FARGO, N.D. – In an effort to lift up our amazing media members and members of the community sharing news on the fight to end hunger and to honor a local media giant and hunger champion, the Great Plains Food Bank has announced the Marv Bossart Voice of Hunger Award. The annual award will recognize strong media members or entities and others that go above and beyond in sharing in our mission of ending hunger through community partnerships.

“Our family is grateful and humbled that Great Plains Food Bank chose our husband and father as namesake for this truly special award,” the Marv Bossart family said in a statement. “He felt it deeply important to give back to a community that had given him so much during his career. Marv was honored to work alongside this mission and also cast a light on Great Plains in its vital work to end hunger in our area.”

“Our media members and those sharing the news of our work each day are invaluable to our ability to serve those in need,” Great Plains Food Bank Communications Manager Jared Slinde said. “We have clients needing to know how they can receive food assistance, volunteers looking for opportunities to give back and food and financial donors that are eager to help support our mission. Being able to quickly communicate all that we have going on here is crucial to our success. We are fortunate to work with outstanding media members each day.”

Bossart was active within the Great Plains Food Bank from 2000 until 2011 in many capacities including vice president of the Daily Bread Program, now called the Fargo-Moorhead Food Recovery Program, from 2000 until 2006. The Fargo-Moorhead Food Recovery Program recovers more than 3 million pounds of food each year from grocery stores, retailers and restaurants that otherwise would go to waste.

The first winner of the Great Plains Food Bank Marv Bossart Voice of Hunger Award will be announced soon.

About the Marv Bossart Voice of Hunger Award
Valuable members of the media and vocal members inside our communities are crucial to the fight to end hunger. The only food bank in the state of North Dakota, the Great Plains Food Bank could not perform this service without powerful champions sharing our mission and telling the community how to volunteer, donate and where those struggling with food insecurity can access our services. With these thoughts in mind, we wished to lift up those incredible media members and community members that continually go the extra mile sharing the message of our work by awarding the Great Plains Food Bank Marv Bossart Voice of Hunger Award. Their service is invaluable.