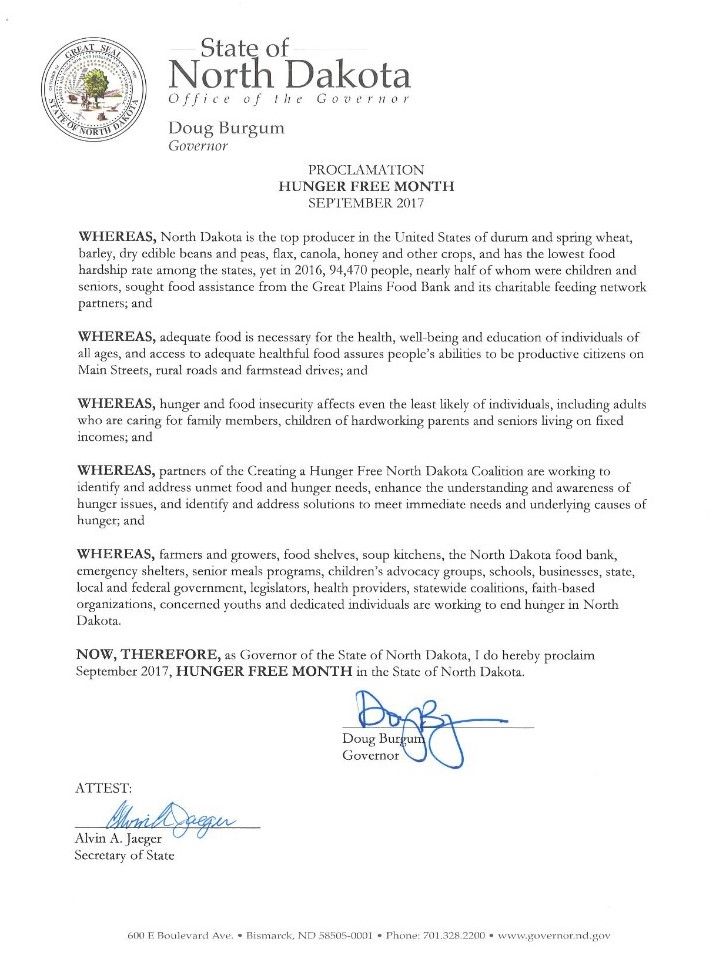 FARGO, N.D. – North Dakota Governor Doug Burgum has joined with the Great Plains Food Bank and the Creating a Hunger Free North Dakota Coalition in signing a proclamation that officially recognizes September as Hunger Free Month throughout the state of North Dakota.

“North Dakota is the top producer in the United States of durum, spring wheat, barley, dry edible beans and peas, flax, canola, honey and other crops, and has the lowest food hardship rate among the states, yet in 2016, 94,470 people, nearly half of whom were children and seniors, sought food assistance from the Great Plains Food Bank and its charitable feeding network partners,” read a portion of the official proclamation from the office of the Governor.

September is recognized nationwide as Hunger Action Month by Feeding America where people all over the country stand together and the nationwide network of food banks to fight hunger, which includes the Great Plains Food Bank.

“We are very grateful and thank Governor Burgum for recognizing September as Hunger Free Month throughout the state of North Dakota,” Great Plains Food Bank CEO Steve Sellent said. “We hope this encourages everyone across the state to take action to help fight food insecurity, which touches the lives of one in nine North Dakotans each year. With your help and many others taking action, we continue to move closer to the day we will truly to be hunger free.”

The Great Plains Food Bank has been encouraging everyone to take action steps each day in September. A full calendar of activities and information surrounding Hunger Action Month can be found HERE.